Dr. Glaser and his group have published over 200 papers and book chapters on a broad range of topics and presented over 250 invited lectures and more than 280 contributed presentations. Roughly a quarter of these publications have resulted from local, national and international collaborations with colleagues in chemistry, physics, mathematics, biochemistry, science education and journalism.

Dr. Glaser received fellowships from the Fonds der Chemischen Industrie, the Fulbright Foundation, the Japan Society for the Promotion of Science (Hokkaido, Visiting Professor, 1997), the Chinese Academy of Science (Beijing, Senior International Visiting Professor 2013 & 2014), and Northwest University in Xi'an (Guest Professor, 2013-), and has been funded by NSF (CHE, DUE, MRI), NIH (NIGMS, NCI), ACS-PRF (G, AC, SE, ND) and other sources. Dr. Glaser was elected fellow of the American Association for the Advancement of Science and of the Royal Society of Chemistry. Dr. Glaser has been serving on many committees in the UM system, and he has been active to strengthen shared governance, academic freedom, peer review, science ethics and science communication.

Rainer Glaser and Julia M. Chang (UC Berkeley, 1984) married in 1996 after a courtship of some ten exciting years, and the couple has two children, Katharine "Kayla" Jade Glaser (b. 1997) and James Chang Glaser (b. 2001), and two cats, our blue Russian Tippy and our brown Noodle. 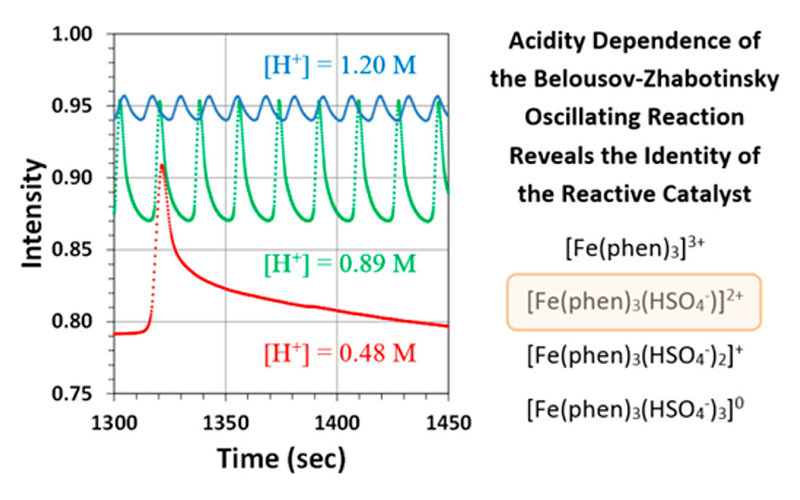 The acidity dependence of the iron-catalyzed bromate-malonic acid Belousov-Zhabotinsky reaction was studied and the temporal evolutions of the oscillation patterns were analyzed.

Guiding Principles: From Electronic Structure Theory to New Concepts in Chemistry is the guiding principle of our research. This principle is applied to studies of Chemistry in Anisotropic Media, and all efforts are benefiting from the Synergy of Tightly Coupled Theoretical and Experimental Studies.